Nick and Aya Travel to Argentina

"Nick and Aya travel to Argentina” is a book about a four-year-old girl Aya and her ten-year-old brother Nick flying to Argentina from the United States together with their parents for vacation. The story takes its readers first to Buenos Aires followed by Bariloche, where the family then starts their adventure driving a rented minivan throughout Patagonia. Children learn the names of some of the existing plants, bushes, animals, fish, national landmarks and food items typical for Argentina. While following Nick and his sister Aya the readers virtually visit a cave, a glacier, a bird sanctuary, lakes, streams, and mountains. They end their vacation at the Iguazu Falls and go back home full of new impressions.

Nick and Aya Travel to Russia

Nick and Aya Travel to Russia is the second book in the series Nick and Aya Travel the World. This time the young adventurers visit the largest country on Earth and begin their explorations in Moscow. The family then flies to Saint Petersburg, followed by Sochi and Kazan, visiting many famous attractions such as museums, palaces, and parks while learning about Russian culture and history and trying typical foods along the way. They enjoy a splash in the aqua park in Kazan and a theme park in Sochi in addition to hiking in the Caucasus mountains before moving on to the Urals that divide the western and eastern parts of Russia’s vast territory. Through the experiences of Nick and his sister Aya the readers visit caves, temples, geysers, and volcanoes, take a train on the Trans-Siberian Railway, see Lake Baikal and the wilderness of Kamchatka Peninsula. Thanks to the map drawings, the book offers a good understanding of Russia’s geography and position in the world, and young readers are able to learn about some of the territorial divisions, varying cultures, and names of traditional foods. Overall, it is a powerful resource for those who wish to expand their knowledge about the country, for those who are going to travel to Russia with kids, and for the children of Russian speakers living abroad. 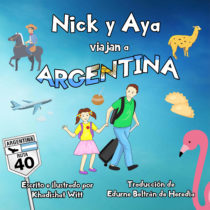